Coco Chanel and the Chocolate Sisters

Weird names for a group of four Cheetahs? You bet – they sure are! But, courtesy of the Cheetah Conservation Foundation,(CCF), we have a group comprising Chanel, Hershey, Nestle and Toblerone roaming free and able to feed themselves right here on Erindi. How did it all happen?

Chanel was born in the wild in May, 2000. She was the only survivor of three cubs after their mother had been shot on a farm near Mangeti, north of Grootfontein. Some livestock farmers still regard Cheetahs as pests and only recently have co-operated by capturing instead of shooting them. At the CCF rehabilitation centre, Chanel teamed up with three other orphans, Hershey, Nestle and Toblerone, whose mother had also been killed on a farm shortly after their birth in 2002. It was in 2007 that CCF staff noticed Chanel pitching up at feeding time with the other three. Over a period of time a bond developed, joining them into a little family under the leadership of Chanel. They were the orphanage four, looked after and fed by humans.

Late in 2009, the CCF launched a program of releasing Cheetah into a 4000ha game-fenced camp, (about the size of 35, 000 football fields!), to see whether they could survive on their own. Chanel and the Chocolate Sisters were chosen to pioneer the initiative because of their close bond, their feisty attitude and the fact that they were all good runners in excellent health. Fitted with VHF radio collars so that the researchers could keep track of them once they were running free, the four were finally released in September, 2010. They were given an Oryx carcass to provide the necessary strength for them to start fending for themselves. Within the first week Chanel hunted and brought down two fully-grown Oryx, but despite delivering a bite to their necks, was unable to complete the kill. The rest of the chocolate box seemed reluctant to help their elder sister and after they had been without food for seven days, the four were given a small snack of two Hartebeest legs to keep them going, but also to leave them a little hungry. The very next day Chanel killed a sub-adult male Oryx all on her own. Since that day, they were independent and hunted as a group. In the space of 118 days in the CCF camp, they http://www.onlinepharmacytabs.com/antidiabetic.html made a total of 63 kills, including Oryx, Eland, Kudu, Steenbuck, Red Hartebeest, Zebra, Duiker and Scrub Hare.

On 7 January, 2011, the four were transported to Erindi and set free on our massive 79,000ha estate. (That’s well over half a million football fields in size!) On that first day we gave them some food but after that they were left to take care of themselves. Together with a CCF researcher, I had the privilege of following them on foot, day after day, for one whole month. We needed to make sure that they would survive and also collected a comprehensive bank of research data on every aspect of their day-to-day living. While they did not mind our presence at a distance, since they had to some extent been habituated to humans at the CCF, we were careful never to invade their space nor to let them feel that we were compromising either their freedom or their ability to stalk and hunt their prey. We were amazed at how quickly and efficiently they slipped into the role of being completely wild. Within a matter of days they regenerated all the genetically embedded hunting instincts of their species. Clearly human intervention and institutional living over a lengthy period of time had not diminished their natural capacities for being cheetahs in the wild. If you see me carrying a gun in the pictures while following Chanel and the Chocolate Sisters on foot through the bush, regard it merely as a safety precaution. Never once did I need to fire a single shot, despite the fact that one afternoon we unexpectedly walked right into a patch of shade where two fully-grown lionesses were taking their siesta. To our utter amazement, the four sisters spontaneously charged the lionesses and chased them off. According to the textbooks on animal behavior, cheetahs simply do not challenge lions. Perhaps they felt compelled to protect us!

Managing this rehabilitation project has been one of the most informative and rewarding experiences of my professional career in the wild. A few weeks ago, the Chocolate Sisters hunted and brought down a Springbok within viewing distance of the deck at Erindi’s main lodge. I hope to be able to introduce you to my four friends of fragrance and chocolate fame when next you visit Erindi. 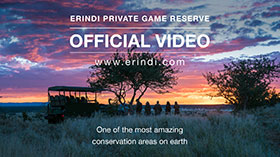 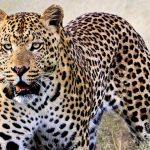